The Veep Neep tribe do not live a life of plenty.  The high, sloped mountains they call home are sandy, dry, and not well suited for conventional agriculture.  And so the Veep Neep subsist by laboriously cultivating high altitude orchards and small terraced gardens to feed themselves and their young… along with raiding the Boulderdrag dwarves who dwell in the fertile valleys below.  The valleys of the Boulderdrag, after all, are a place of plenty.  Rich, loamy, green.  If some divine force saw it fit to make the land of the dwarves with better stuff than the land of the Harpies, wasn’t it fair if the dwarves must “share” a few of their baby goats from time to time?

The Boulderdrag Dwarves, however, know better.  The land of the dwarves and harpies are not made of different substance at all, but are of the same fundamental material: Plutonic Rocks.  The Boulderdrag understand that when Plutonic Rocks are first broken up by wind and water and ice, what results is large and course: material that is not suited for planting.  For this reason, the soil atop peaks and high slopes are made of such stuff.  However, as that material descends the mountain amid the vehicle of rain and ice, it is progressively ground down into finer and finer particles and deposited on the banks of rivers.  It is on these rivers that the Boulderdrag build their farmsteads.

To the Veep Neep, the god of the mountain is unjust and shows fickle favoritism to the dwarves.  But the Boulderdrag feel very differently.  “The mountain not only gives us all that we need,” their wise king once said.  “But her labor is unending on our behalf.  Every day, every minute, every second she tears and grinds at her own body to fill our eroding fields with silt.  She grows shorter every season so that we, of the Boulderdrag, can grow taller.  The Veep Neep want to blame the mountain for their poverty, but the mountain speaks to us all about the plenty that she offers.   But to hear her you must learn her language and be willing to follow her advice.”

We begin part 2 of the rock development diary with perhaps the most iconic rocks of all: Plutonic Rocks.  This stuff of mountains, such as granite, is what we often think of first when we hear the word “rock.”  Plutonic Rocks are formed by the slow cooling of magma beneath the surface and are then uplifted either by plate collision or isostatic uplift.  Because you generally find Plutonic Rocks in collision belts where two tectonic plates once struck one another and raised the terrain (or continue to strike one another), they also tend to be ideal locations to extract precious gems and metals.

Perhaps more important, however, is the fact that Plutonic Rocks have been significantly less reworked by the forces of nature than sedimentary rocks, and thus retain much more of the mineral richness that plants crave from soil.  Soil materials which have been generated by physical weathering of young Plutonic Rocks tend to be mineral rich.  Unfortunately, the initial weathering of Plutonic Rocks generates a sandy or clay rich texture with very little silt.  This texture is not favorable for the purpose of retaining water or producing soil aggregates.  Thus, soils directly atop weathered Plutonic Rocks have difficulty retaining water once soil organic matter has been consumed, and will erode very easily if put to the plow.  Sustained, high intensity agriculture can only occur under these conditions with intensive investment in agricultural infrastructure.

However, natural forces in the form of glaciers and flowing water over rugged terrain can break down the texture of Plutonic Rock types into agriculturally favorable silts.  Under such circumstances, not only does a farmer benefit from the rich mineral fertility of Plutonic Rocks, but also the favorable soil texture of silty loam.  For this reason, valley bottom soils amid young mountains tends to be among the most favorable in the world.  Down below is an example of these real world principles at work in Songs of the Eons: 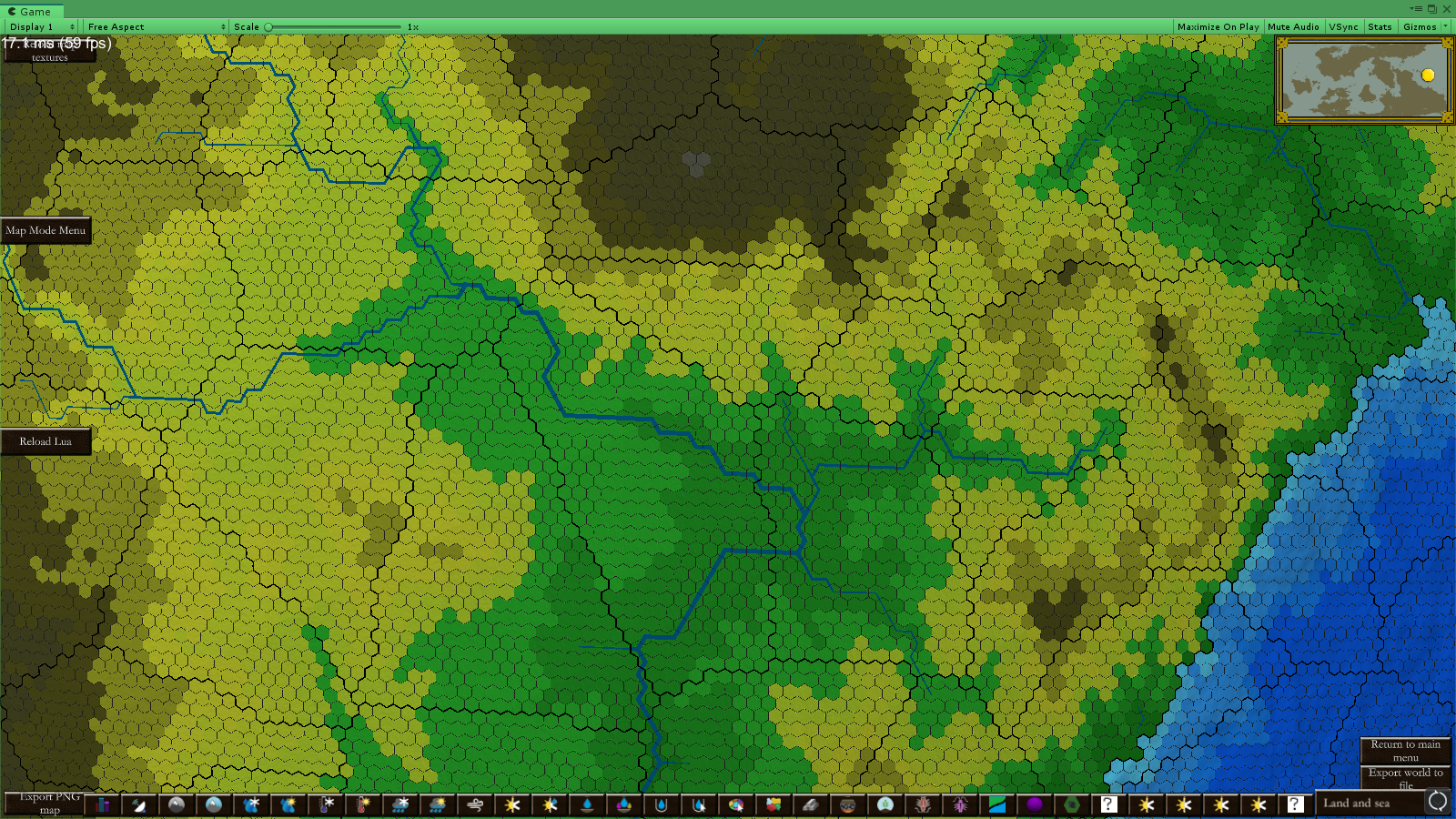 Up above we can see water draining from the mountain, and a river draining toward the coast.  The path of the water and the volume that flows through an area picks up material from the bedrock underneath. 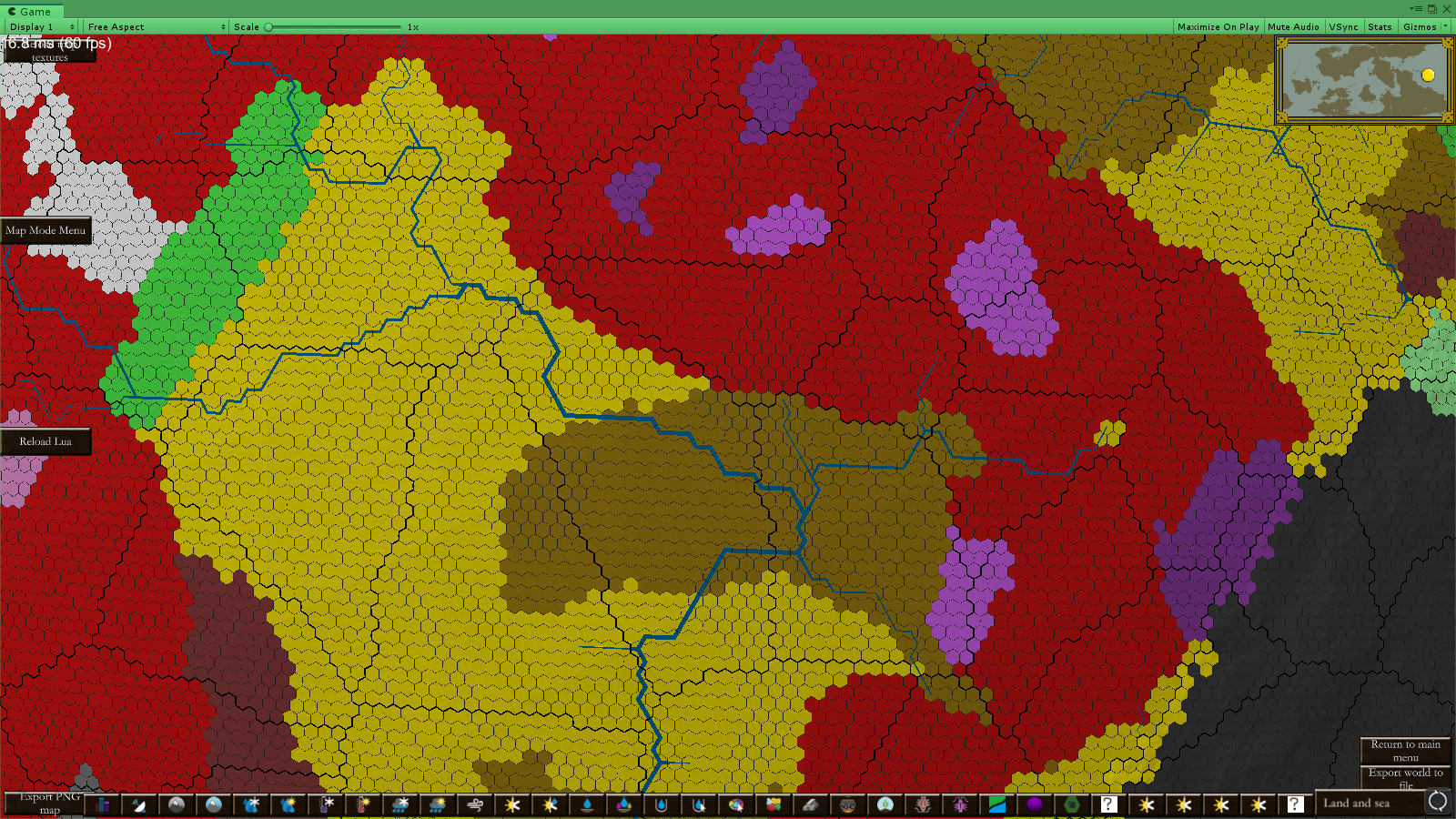 In the image above, we can see the various bedrock types which lie beneath the landscape.  The yellow and mustard color near the middle are mineral poor sedimentary rocks.  The reds, pinks, and purples are mineral rich Plutonic Rocks. 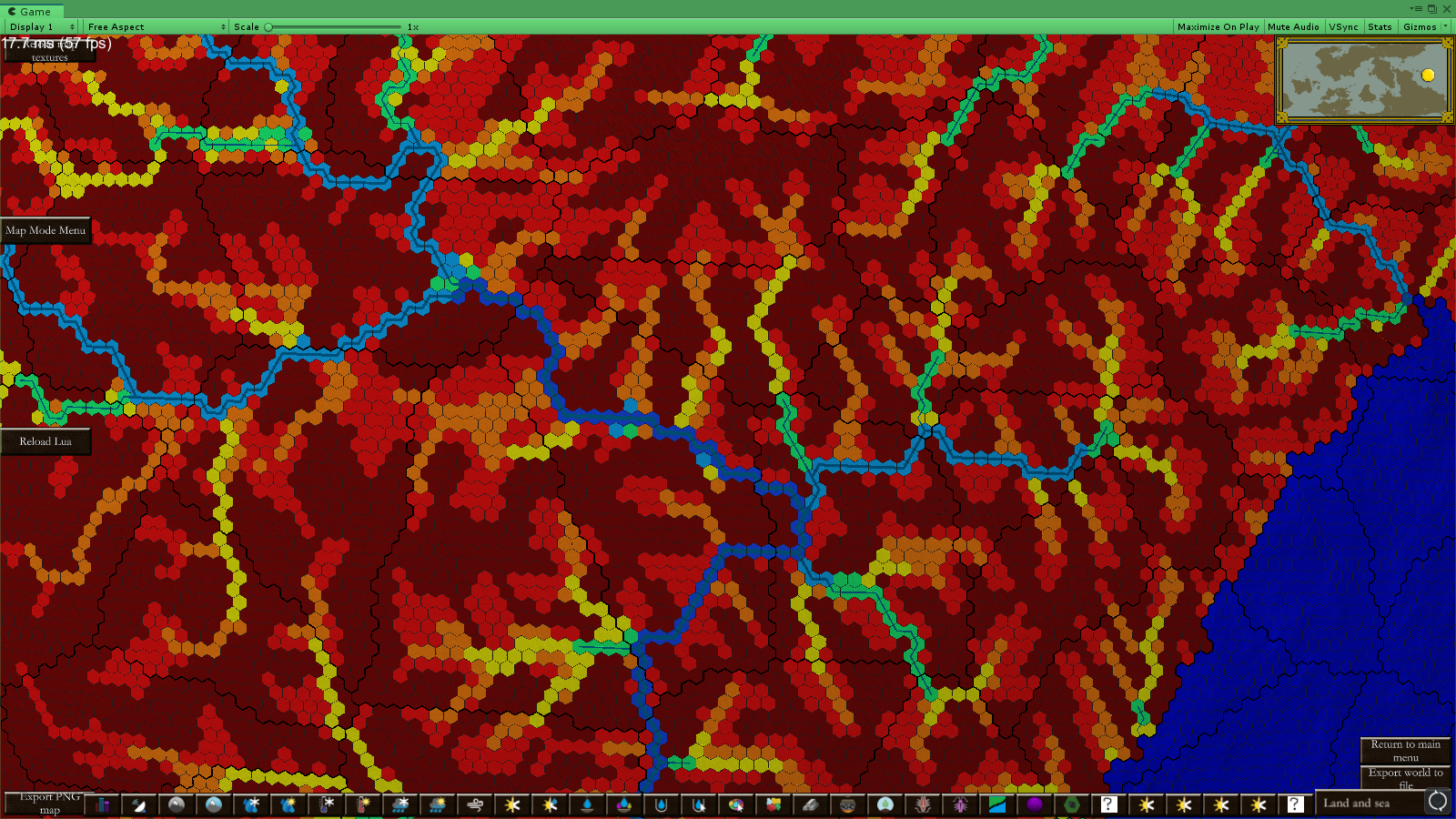 In this image above we can see a more detailed map of waterflow.  Much of the smaller streams and rivulletes that eventually form the main rivers weather down and pick up material from the mineral rich Plutonic bedrock.  As it transports the Plutonic material, it breaks down the large sand sized particles into silt sized particles while retaining the mineral fertility. 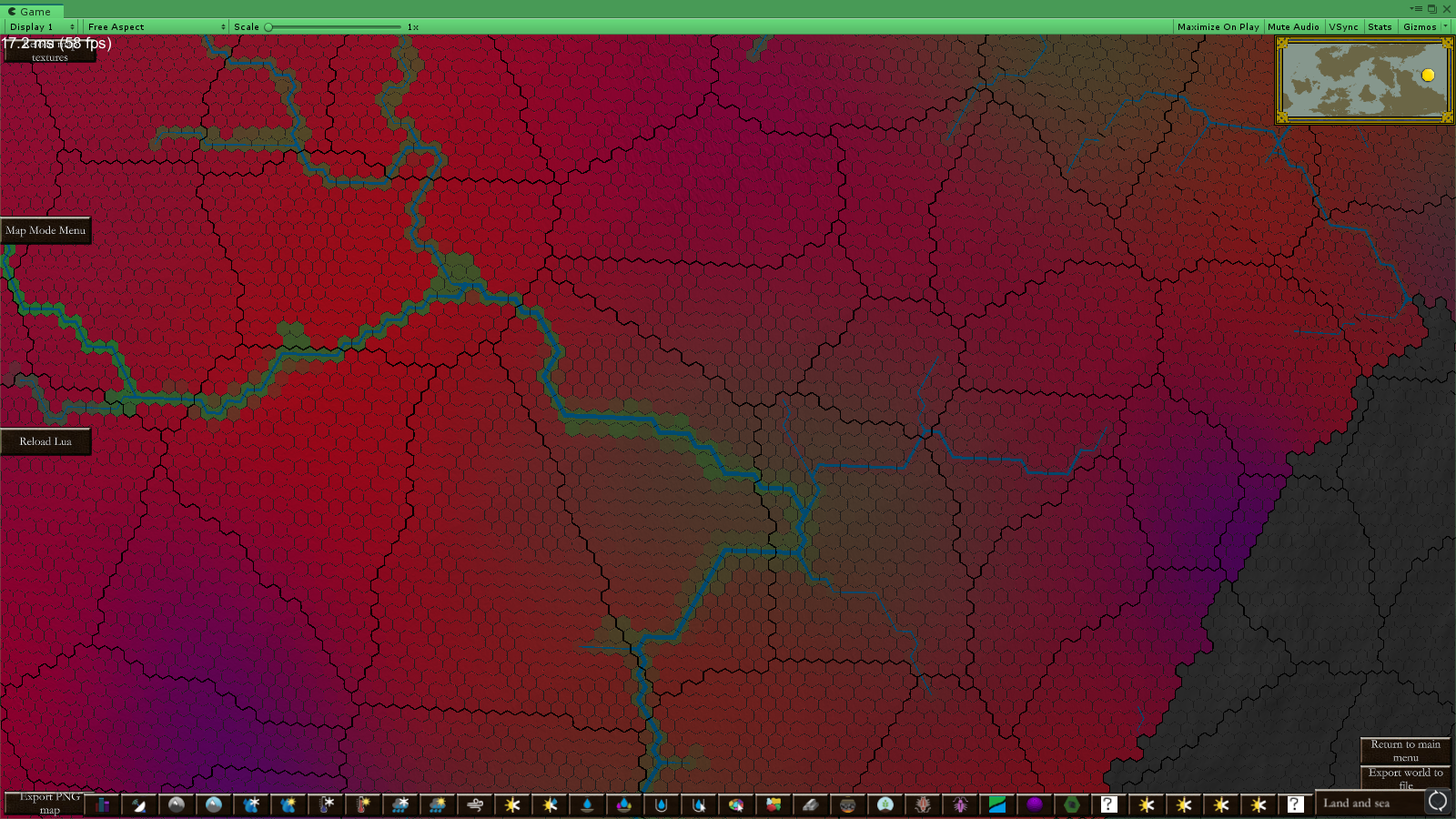 Up above we can see a soil texture map of the same region.  The areas in red are dominated by sand and gravels, and are thus unfavorable for agriculture.  However, the flat, greenish regions surrounding the rivers are a loamy mix of sand, silt, and clay: an ideal texture for agriculture.  They are loamy because the historic meandering path of the rivers as well as its regular flooding have created alluvial soils composed of the contents of those rivers: the worn down, Plutonic Rock Material that was picked up in the river's headwaters.  The soil around all rivers will reflect the material that was captured upstream, and depending on what bedrock was upstream and the erosive forces that exist there, the contents of each river (and the soil surrounding them will be different as well.

Up above we can see the mineral fertility value of the soil to plants.  The large green aura we see around the perimeter has highly favorable, mineral rich material, but if you look back at the previous soil texture mapmode, we can see that these areas also have extremely unfavorable soil texture, making them poor for agriculture despite being mineralogically rich.  Toward the interior we can see that most of the soil has poor mineral nutrient: the product of mineral poor sedimentary sandstone and siltstone.  However, the areas around the rivers reflect the Plutonic Rock material transported from the uplands by water and deposited on the river banks.  While the upland mountains and lowland sedimentary soils would both make marginal crop lands (if arable at all!), the lands surrounding the rivers are both highly fertile, have an abundance of favorable soil texture, water and soil depth.

In both the real world and in Songs of the Eons, this is the reason why some of the best pre-modern agriculture was often at the bottom of fertile mountain valleys, and also an influencing factor for why societies frequently wedged in these mountain valleys had high rates of urbanization.  Even though the actual land area available for farming is relatively small, the land that is available produces the large surpluses necessary to support non-farming populations.  By capturing this dynamic, we hope to replicate some of the same interesting outcomes we've seen in history, like the highly urbanized Greeks who's cities like Miletus, Athens, Sparta, and Pergamon were dispraportionately wedged between mountain valleys.

To be clear, not all Plutonic Rocks are equal or produce the same results.  Due to practicality constraints, Songs of the Eons has also consolidated some rock types that you see in the real world (many of the Metamorphics) and combined them in terms of their "function" when it comes to soil and the resources that one might find among them.  We've settled on three main kinds of Plutonic "mountain" Rocks, which are down below:

Acid Plutonics are the most abundant of the Plutonic Rocks.  They weather poorly and produce thin soils of sandy material with some clay.  If the Acid Plutonic rock is geologically young however, it can still weather down into fairly mineral rich material.  Acid Plutonic rocks in geologically ancient regions similar to Africa and Australia tend to have most of their nutrients leeched out.

Basic Plutonics weather better than Acid Plutonics and produce a high amount of clay and is second in mineral nutrients only to the richest of Volcanic rocks.  Though the local soil that is produced by Basic Plutonics is dangerous to farm and live on, any locale which receives a modest amount of broken down soil subsidies from Basic Plutonic rock via glaciers or water will be greatly enriched.

Mixed Plutonics are a combination of both Acid and Basic Plutonics and thus has mixed characteristics.  Due to the high sand content of Mixed Plutonics vs basic Plutonics, the weathering effects of water on that sand can produce a high proportion of silty material.  In other words, while Mixed  Plutonics won’t make ideal local soils, alluvial soils on river banks produced entirely of weathered and transported Mixed Plutonics will be among the most favorable in the world, as it will have both ideal soil texture and substantial mineral richness.

So that is all for our discussion of rocks this week.  Next week, we'll discuss volcanic rocks and the role they play in Songs of the Eons.  And don't worry, once we've taken our grand tour of rocks, we'll return to the story of the Ardians and use what we've learned to determine how they were humbled by our humble rocks.