The Islands of LaaLeeLaay and the Islands of Samana were but a few dozen kilometers apart from one another.  They experienced the same climate, enjoyed the same marine life, and were roughly the same size.  However, beyond this, the two island chains were nothing alike.  The LaaLeeLaay islands were rich agricultural lands with rapidly growing, green forests.  It'd been contiguously inhabitated by a settled human culture for hundreds of years.  The Samanan Islands, on the other hand, were the opposite: aside from some scrub, coconut producing palm trees, and rich marine life, the islands offered very little.  Even just walking across the islands' lengths was perilous, as the ground itself had virtually no developed soil and the jagged limestone cut at one’s feet.

At numerous times in the past, when the humans of the LaaLeeLaay islands grew overpopulated, civil strife ensued, and the losers of these civil conflicts found themselves banished to live on the Samanan Islands.  These settlements were never able to adapt the appropriate cultural innovations quickly enough to survive, and it always took but a few generations before scarcity and depravity whittled down their numbers to extinction.

Eventually, Vermen who were stowed away on a merchant ship settled the island when said ship wrecked upon the reefs.  Due to the lower nutrient and caloric needs of Vermen, they fit neatly into the niche at low population densities.  The sparsely populated tribes of Vermen learned to subsist successfully on fishing the rich reefs and swimming on rafts to LaaLeeLaay in order to pilfer the islands’ plenty.

So why were these island chains so radically different despite apparently identical geography?  As it turns out, the two islands were composed of two very different rock types.  LaaLeeLaay was a volcanic island chain similar to Hawaii, with rich, Andisolic soils.  Samana was like the Bahamas, with young limestone reef bedrock and poorly developed soils.  The slopes of LaaLeeLaay would weather down into favorable soil texture with robust mineral nutrients, while the rock of Samana would simply dissolve and leave behind jagged, inter tidal karsts.

However, the Samanan Islands would eventually become useful for the very reason it was once uninhabitable.  As time passed and the nearby Islands of LaaLeeLaay developed commercial ties with the outside world, they would begin to grow sugar on their rich volcanic soil for export.  And with commerce came ships laden with goods.  And with the arrival of those ships, the Samanan Islands would become home to the infamous "Sea Rats."

The Sea Rats were a combination of the native Vermen that dwelled on the Samana Archipelago and marooned human sailors and mutineers who found themselves on the islands' shores.  The humans brought with them knowledge of modern weaponry, and the Vermen had the local fisher culture to keep them provisioned as well as knowledge of the perilous waters around the islands.  What evolved was a tight knit but rowdy, multiracial brotherhood of corsairs that never could have existed long were it not for Samana’s unique rock type.  For the same reason that the Bahamian islands became a pirate haven, so too would Samana.  The rugged, ungenerous landscape that came about as a result of its young limestone was now its impenetrable armor.

Because the island had no soil on which to grow crops, it was cost prohibitive for commercial powers to garrison pirate hunting soldiers there.  And even if they had, attempting to patrol its jagged inland and coasts by foot in search of thousands of potential pirate haunts and hideaways was also impractical.  The easily weathered reef rock also made the surrounding waters jagged with reefs.  It was nearly impossible for large ships of war to navigate through without local knowledge (which few ever had besides the pirates and their allies, due to the islands extremely low population density).  While not impossible, its unlikely The Sea Rats ever would have arisen or lasted very long had they developed upon the rich soils of a volcanic island.  From within the haunts and cays of their low elevation archipelago, The Sea Rats would strike out at nearby shipping with their light craft at high tide, and when pursued by ships of war, they’d time their retreat home with low tide.  Any heavy warship foolish enough to chase The Sea Rats through Samana’s treacherous reefs would become fouled upon the reefs: yet more spoils for the island’s inhabitants.

The Sea Rats would grow so powerful with time--- and were so difficult to dislodge--- that they would eventually serve formally in the navies of great empires as privateers, and win fame and noble titles in civilized lands.  One Vermen corsair even earned the rank of count in the human Kingdom of Lutria for his service to the crown (and liberally greased palms at court), and eons later would be remembered erroneously as "The Rat King of Lutria."

Volcanic Rocks are produced from hot spots, plate convergence, or plate divergent volcanoes which spew forth magma on the surface rapidly.  Of all the major bedrock types, volcanic bedrock tends to create the best short term land for rain fed agriculture.  Volcanic bedrocks produce very mineral rich soils while also creating soil texture which is generally favorable for water infiltration, retention, and aeration.  They can also “subsidize” other nearby lands with rich volcanic ash from eruptions, as well as when the bedrock is ground up and transported via glacial action or rivers and deposited elsewhere.  Wild ecosystems also tend to thrive on volcanic soils, as forests can easily pull from the soil all of the nutrients they need.  When forests are destroyed on volcanic soils--- either by natural forces or deforestation--- they can regenerate much more quickly.

The exceptional fertility of soils weathered from volcanic rocks has manifested itself in the real world in a variety of ways.  Roman Latium--- the cradle of the Roman Republic--- was composed of rich, volcanic Andisolic soil, and the high agricultural yields of this soil helped to propel Rome to greatness.  Japan, Java, the mighty Greek city state of Syracuse, and the lands in and around the Aztec Lake Texoco all enjoyed rich volcanic soils as well, and thus enjoyed spectacularly high population densities on relatively small patches of land.  The famous sugar and tobacco plantations of the Caribbean and the riches of the spice islands all came about atop rich volcanic soils as well.  The Nile River, who’s headwaters nourish themselves in the rift valleys of the Asfar Hot Spot, once had its banks refreshed each year by rich volcanic material (before it was dammed).

As per a current example in game... 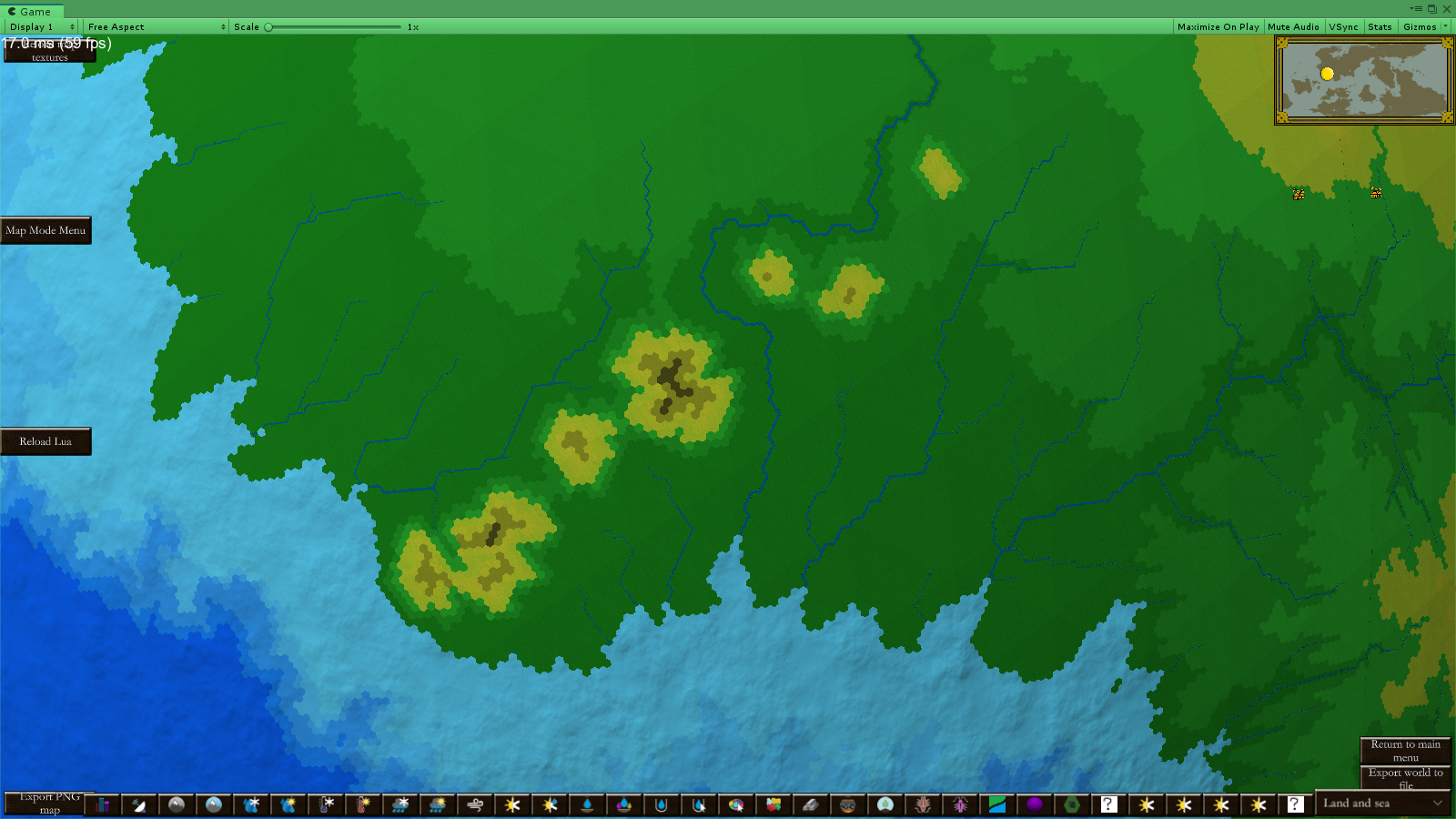 Up above we can see a hot spot sprouting volcanoes along an otherwise infertile region of low elevation crustal extension as the tectonic plate moves above it.

Up above, green area is lime stone and the various hues of pink represent volcanic bedrock produced by eons of volcanic intrusion. 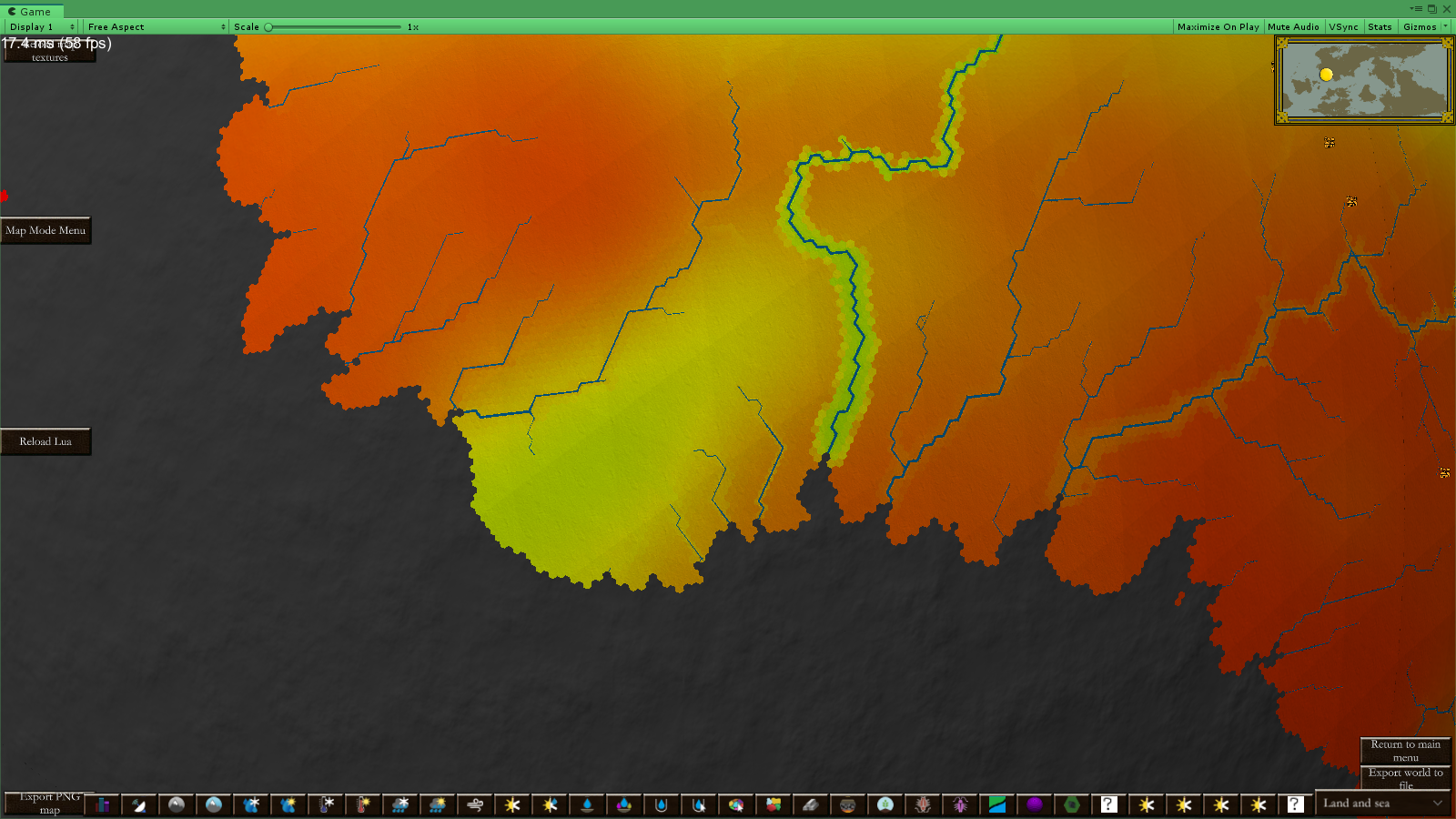 Now we examine the mineral nutrient or "cation exchange" map mode.  This represents mineralogically rich areas for plant growth, and we can see how the richness in mineral value corresponds with the path of the hotspot and its volcanoes.  You can also see an "aura" of ash from historic eruptions which have enriched the land around the slopes.  Beyond that aura is mineralogically poor soil weathered from limestone.  Between the volcanoes snakes a river which has produced very rich soils on its banks, but these soils are only partially influenced from the nearby volcanoes. 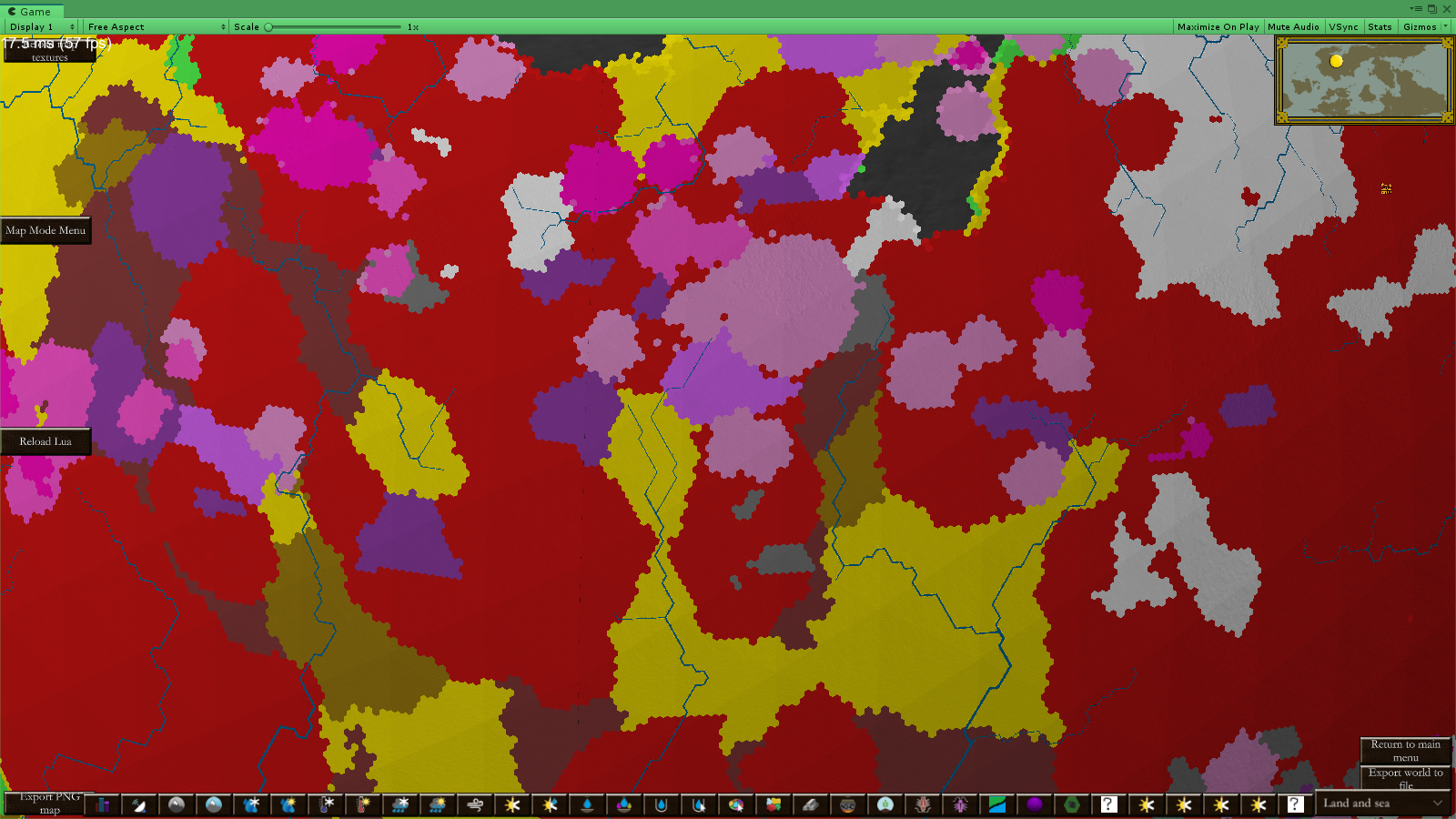 Up above you can see the headwaters of the river.  This region was uplifted by the collision of an ocean plate and land plate.  The result is geologically young and rich plutonic rocks, accompanied by a significant abundance of volcanic material.  This material weathers down and passes down river, where it deposits on the banks of the river.

So while it may seem like Volcanic bedrock is superior rock to base the heart of one’s civilization upon, it is also most likely of any rock type to be in the shadow of natural disasters.  The obvious peril facing such civilizations are volcanic eruptions.  The catastrophe at Pompeii has played itself out many times in history and in many places in the world.  Populations are attracted to--- and thrive--- on the volcanic rock that weathers into volcanic soils, but the ground beneath them is only fertile because the volcano has erupted in the recent past… and will again.

But this is not the only calamity that inhabitants of volcanic soils have to worry about.  The significant majority of volcanoes in the world exist along dangerous, active plate boundaries.  As a result, peoples who dwell on rich volcanic soils are dramatically more likely to suffer the effects of catastrophic Earth quakes.  Its not coincidence that all of the examples we’ve listed earlier experienced severe, disruptive earthquakes.

But beyond natural disasters, soils that weather from volcanic rocks have other problems as well.  Volcanic soil frequently comes with sloping terrain, which can easily erode if the land is abused.  If the silty and clay rich soils atop volcanic bedrock is left uncovered and the organic material depleted, it can result in a catastrophic mass erosion event, resulting in rendering not only the volcanic soil unusable for years or decades, but also the surrounding lands as well.

To put it simply, societies that exist atop volcanic rocks enjoy the lowest investment, highest output agriculture in the world… but are the most likely to suffer from massive disturbance events that--- if they don’t threaten to end your society on their own--- will add to the other pressures your society faces.  A volcanic eruption that wipes out your most prosperous city or an Earthquake that annihilates your society’s walled defenses may seem survivable on their own, but not during a war where you are fighting for your survival.  Playing atop volcanic bedrock is akin to playing a game on easy mode, but at short, random intervals the difficulty is ramped up beyond what would otherwise be the highest levels.

Acid Volcanic Rocks: Acid Volcanics are the least mineral rich of the three volcanic rocks, but are still rich compared to most other rock types.  However, when local weathering dominates soil formation, Acid Volcanic rock produces an ideal, loamy mix of sand, silt, and clay.  The result is a soil that is ideal for retaining moisture and maximizing the value of rainfall.  It tends to be the most stable soil of the 3 volcanic rocks.

Aragonite Limestone, AKA “Young Limestone”:  formed from a mix of aragonite sand and recent, compacted coral reef, calcium carbonate material.  Young Limestone can be as youthful as a few thousand years, having been recently a coral reef which was exposed by sea level decline.  Due to its geologic youth, it doesn’t have the same weatherable mix of soil textures that other limestones have, thus it produces very thin local soils which is unfavorable for agriculture.  Young Limestone also weathers very quickly, and because it leaves behind little residual material it produces a very jagged.  Young limestone tends to exist very close to sea level, particularly around the intertidal zones.  Young limestone that is exposed to land is almost always circled by vibrant coral reefs.