Events, Decisions, Preliminary Biomes and the road to gameplay

We just released a small patch (this time without a number because we won't call it 0.2 until vegetation is finished and we ran out of digits with the release of 0.1.9)

It's a rather small update, but it brings some of the first biomes and sets up technical groundwork for future gameplay.

In no particular order, the update brings:

With that of the way, here's a bunch of screenshots 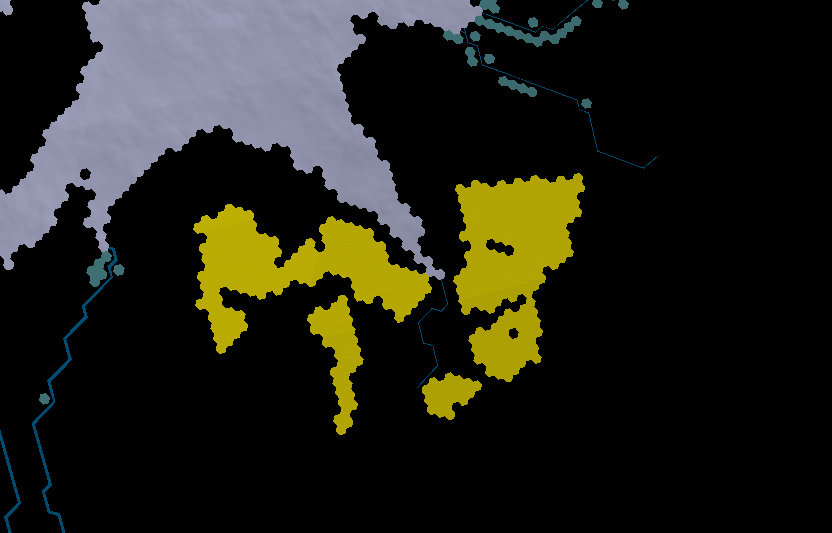 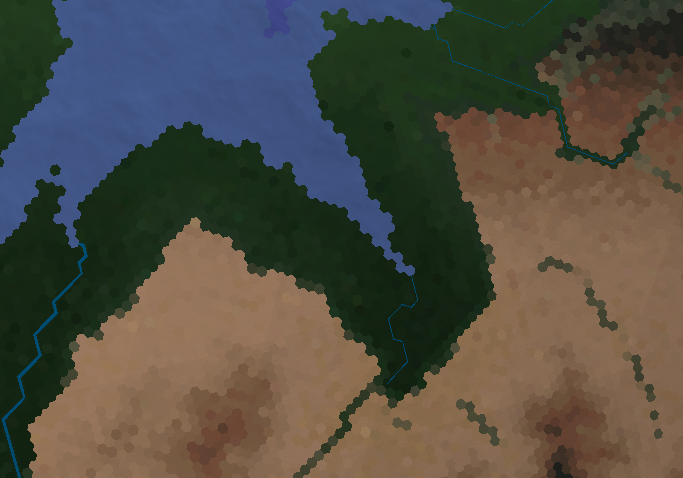 The same area, in the true colour map moe. Stark difference between dry and lush areas is caused by a sudden change in porosity of rocks surrounding the lake.

As can be seen by comparison of the two above screenshots, real colour map mode doesnt account for new biome data just yet. 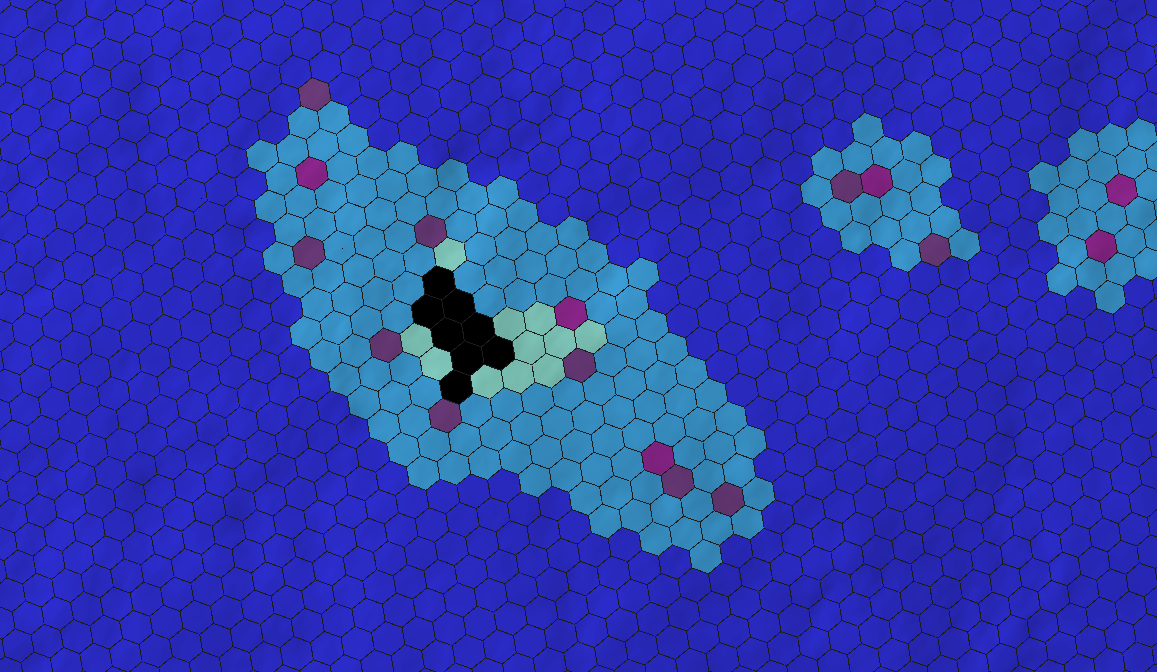 Dark and bright shades of purple/magenta represent cold seeps and hydrothermal vents respectively. On abyssal plains, they will act as "oases" around which deep water nations form. In areas closer to the surface, they will provide unique ecosystems for exploitation by mermen and other races. 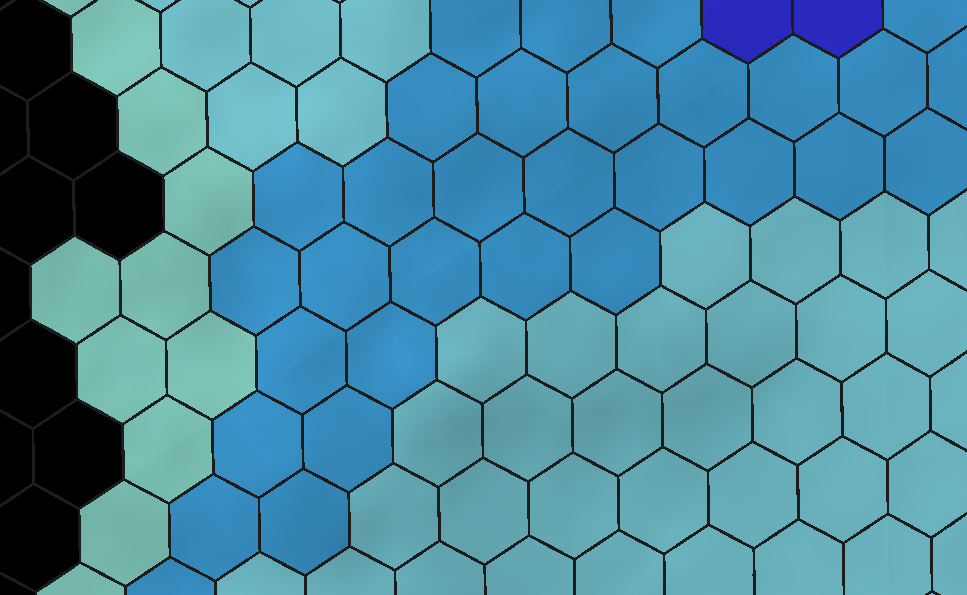 This screenshot shows a kelp forest (darker shade of green along the coast) nearby a coral reef (slightly lighter, more blueish shade of green).

While both are biologically active biomes, they will provide the undersea races with different types of animals and plants to hunt and forage for, leading to different cultures and traditions. 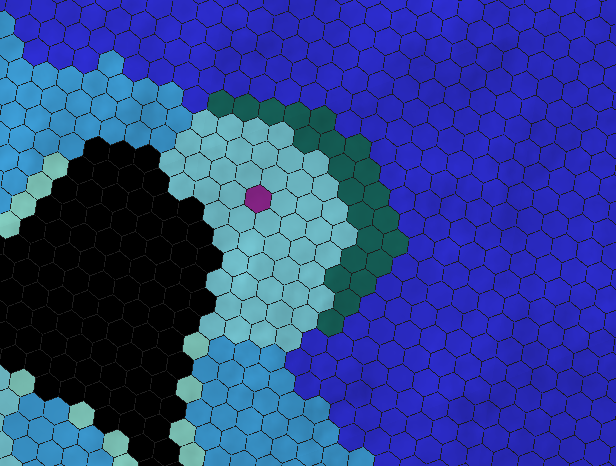 Reefs in SotE will have 2 subtypes. "Standard" reefs and deepwater reefs (also sometimes referred to as "mounds"). The latter can be found at much deeper sea tiles but they provide less biological activity and biomass to local races. Still, deep in the abyss there may be no other viable place for semi-settled people. 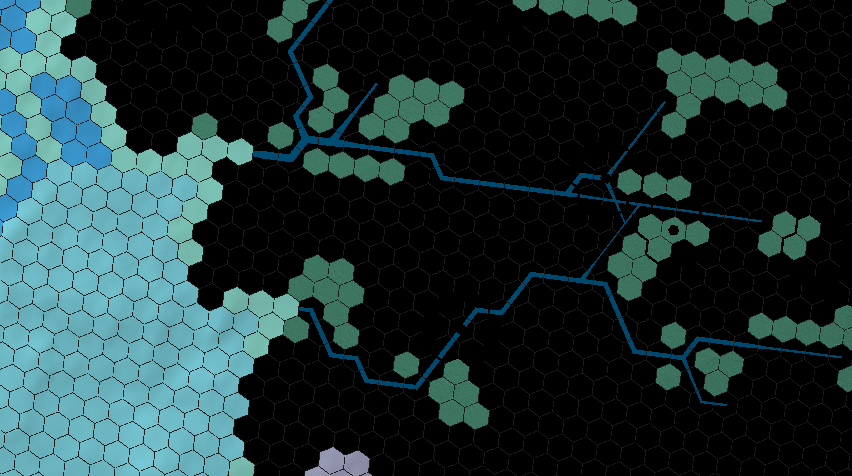 Around rivers flowing slowly through flat areas complex wetland networks will form. At the moment they're subdivided into 4 subtypes. Marshes, wetlands, bogs and swamps. Each having unique sets of local flora and fauna.

We also added mermen. While they haven't had their racial spotlight just yet, we added them to test underwater native migrations and settlements. They're represented by the blue colour. They can survive only relatively low pressures and as such you wont find any mermen settlements on abyssal plains. 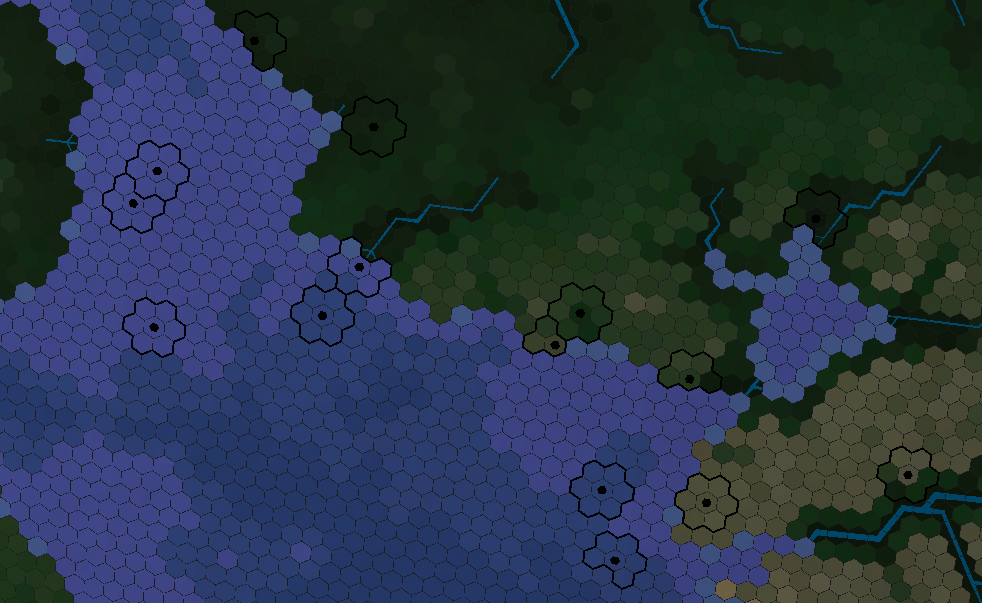 Speaking of underwater settlements, here are some! Settlements are now marked with a small black hexagon in the middle of a tile. 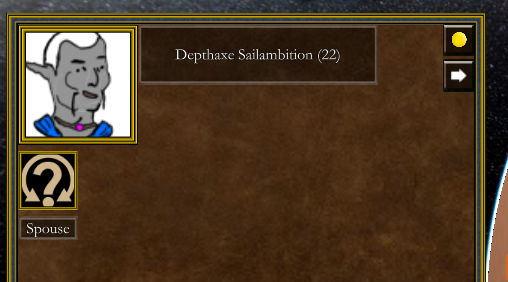 These settlements will host characters. At the moment, we spawn one character in each settlement for debugging purposes. We also have a fully working character portrait system, inspired by that from Crusader Kings 2 (graphics are of course a placeholder) 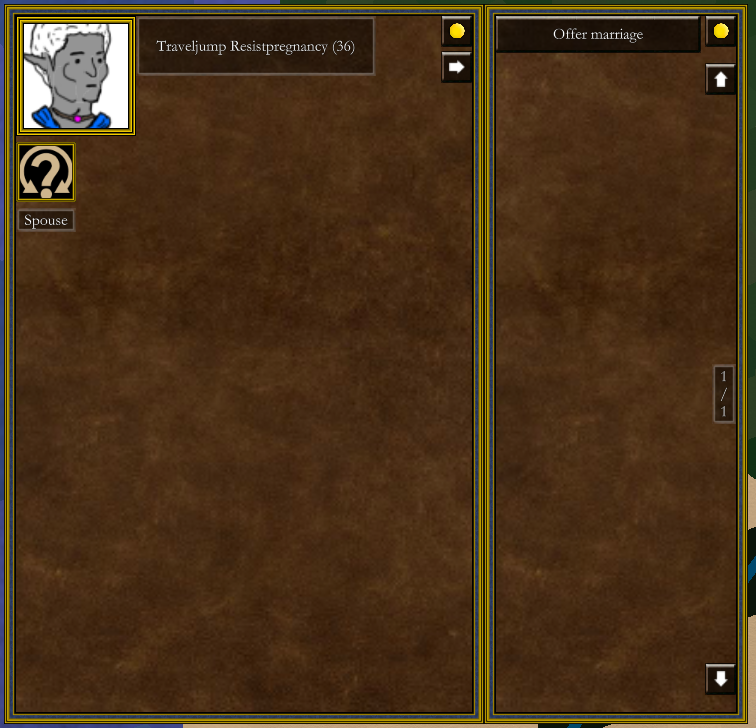 If the player is in game as a character (as opposed to being in game as an observer) it will be possible to interact with different types of entities through decisions. They're placed in their own context menu, usually on the right of the entity inspector. Clicking on decisions will cause events to fire on other characters which will in turn prompt their reactions to the player. At the same time, other characters and agents will do the same to the player and each other. As such, all in-game events will be direct results of real agent/character decisions (with exception of natural calamities). 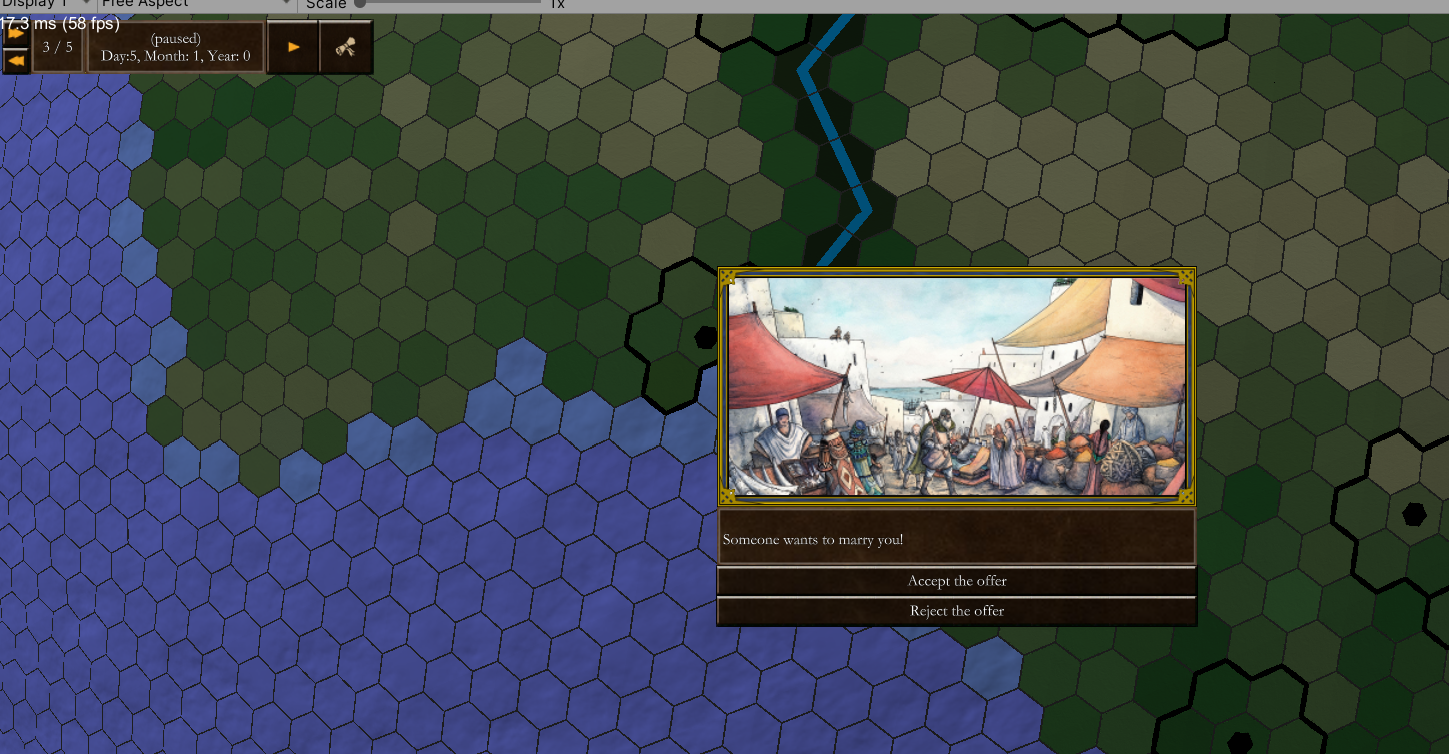 Events are fully synchronized over the network in multiplayer. Here's an event caused by another player's action (also, note the pausable, adjustable calendar in the top left corner of the screen, fully implementing the promised pausable real-time game loop) 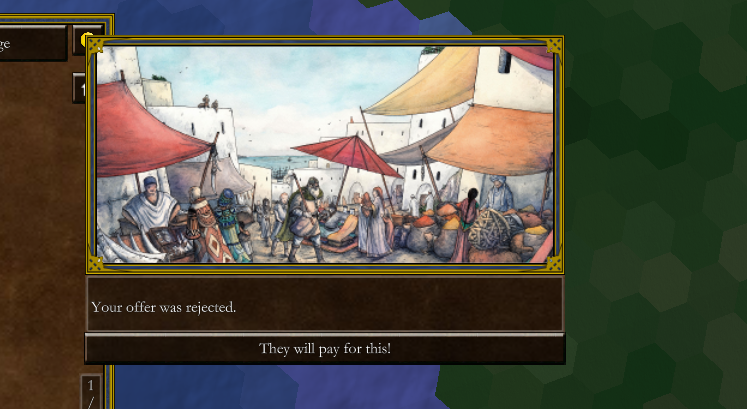 Events can cause other events in return. The previous player decided to reject the offer, causing another event to trigger. The event system is very flexible and will be utilized to achieve a variety of goals. Our modding language is Lua (running on LuaJIT for maximum performance), so the limit of what can be done with this system lies really only in one's imagination and perseverence.

There are a couple other features left (as mentioned on the list at the top of this post) but to keep things relatively short, I'll leave them for the next time.

In the coming weeks we'll focus on adding preliminary pops based on farming favourability map mode, adding accurate settlement creation logic and adding events and decisions for agents to use.

Demian is still on a hiatus so I've been working mostly alone but we've reached the point where the work can continue at a reasonable pace into the future without delays caused by absence of one of us.

Thank you for your attention ^ . ^

We just released a small patch (this time without a number because we won't call it 0.2 until vegetation is finished and we ran out of digits with the release of 0.1.9)

But the minor update that comes after 0.1.9 is 0.1.10... You're allowed to have more than 10 minor updates between each major update

I don't like such patch systems and there were already other patches on the way that we didn't inform people around so public and private versions were out of sync. As such, I think it's better to simply update the game repeatedly until we are ready to increment the minor version number.