Why Does a Living World Matter? 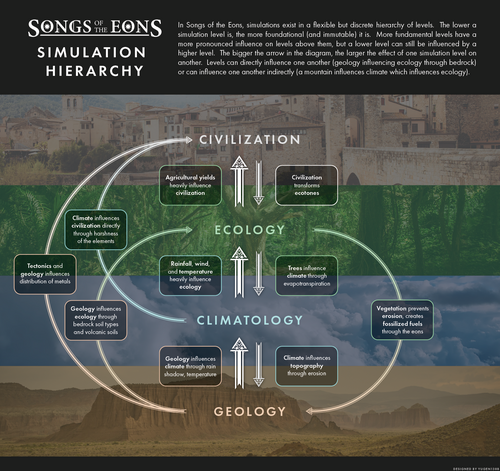 Songs of the Eons aspires to be a game with a living world that simulates the underlying processes that we witness in the real world, from geology, climatology, hydrology, ecology, to economics… but why?  It’s often assumed by some avid strategy gamers that we’re wasting our time with deep simulations.  That while these simulations are interesting as academic exercises, they are detached from relevant gameplay.  A common (and not unreasonable) question that I hear quite often is: “Why waste all this time creating simulations and living worlds when you could just be making gameplay mechanics?”

There are a number of intuitive answers to this question--- from emergent storylines to the influence of simulation on player psychology--- but the least intuitive and most important answer is this: SotE’s simulations ARE the mechanics.  Let me explain.

In a conventional grand strategy game, if I wanted to make a super volcano erupt which blotted out the sun, caused crop failures, and generated chaos throughout the world as a result, I would likely need to program this entire event from scratch.  I’d need to decide where the volcano was, what the range of influence was, to what extent tiles were being influenced, etc.  The scripting process would likely involve hundreds of lines of code or more, depending on how in-depth it was, and it would be relatively disconnected from the rest of the game.

However, in Songs of the Eons, creating this “event” would be very simple.  All we have to do is identify one of the super volcanoes that exist in the simulation, cause it to erupt with the eruption function that already exists, and then add a single tweak to the amount of light that penetrates each tile.  This simple alteration of the variables of the simulation then will generate effects that automatically cascade through all of the other systems.

When the annual plant growth function is called, the reduction in light reduces photosynthesis, which automatically reduces crop yields.  The regular climate function picks up the variable as well and reduces temperature.  Populations of the world suffer the reduced yields in the form of slower population growth and starvation, and they in turn put pressure on the various agents that govern them.  With all of the key simulations in place, the disruption in trade, the civil wars, the peasant revolts, the famines, the migrations, and everything that follows will involve no additional coding.

Because the simulations would take care of everything else down stream, creating this scenario merely involves 10 lines of code and a few minutes.  Conversely, generating a conventional event this consequential for a conventional strategy game would likely take a few days.  What’s more, the quality of this event in SotE is much richer.  Not only will civilized societies in this example see their crops fail, but wild vegetation growth throughout the world will suffer as well, causing declines in animal populations (which also means less food for hunters), favor scrub like vegetation over trees, and leave a layer of fertile volcanic ash around the world from which societies can--- literally--- rise from the ashes.  And all of this additional richness comes at little to no additional cost.

This is just one example of the power of deep simulation.  The upfront programming and computational overhead of building these simulations takes more work than a traditional game, but once they are done, we can introduce complex and influential new mechanics by simply tweaking variables in the simulation, thereby producing far reaching, organic consequences.

And beyond the programmer’s perspective, these deep simulations will also deeply influence the player’s experience as well.

In Songs of the Eons, your deeds will have broad consequences in the game world.  In most strategy games, you might press a button and spend some currency to generate a modifier in your city or province, a mechanic that is ultimately stale and lifeless.  What’s more, the “right” answer to a problem like this is often easily answered by opening a spreadsheet and running some calculations.

In SotE, we want the consequences of your actions to be much further reaching and require a deeper level of analysis.  If you want to, say, increase the population of a province, you might do so by furnishing the frontiers with protection and accessibility and encourage your people to settle that land and bring it under cultivation.  But beyond just the cost of furnishing them with security and infrastructure, you must weigh a multitude of other qualitative “big picture” concerns.  Is the short term burst of population growth worth the long term damage of deforestation and soil erosion?  Do you pass laws to mitigate the afore mentioned consequences, or do you leverage these short term gains against your existential enemies?  Would the objective of improving your population be better served by instead focusing on befriending or exterminating the Gnolls that carry away farmers and livestock on your other frontiers?  Or perhaps instead it would be better to build granaries in preparation for the next, big drought that might kill thousands and shake the people’s faith in their leaders. There is no single right decision that you can make, only “rightness” in the context of your overarching strategy.

Because player decisions tap into the game’s deep simulation and send ripples through the world, the player will have tremendous freedom and options in bettering their society and pursuing their own objectives.  Most of all, they will be rewarded for their creativity.  It might seem obvious that defeating an enemy can be done by invasion, but it might strike a clever player that settling a frontier to exploit its furs--- thus crashing the price of furs which your enemy relies on for its tax base--- might be both a lucrative and pragmatic means to bring that enemy low.  Once again, this creative approach by the player wouldn’t be some scripted gameplay mechanic. The player would instead come to this conclusion through an understanding of the simulation and evaluation of the economic and geopolitical landscape, then manipulate the simulation in numerous small ways (finance roads and forts to the wilderness, negotiate with and bribe the feral races of said wilderness, build trade posts at river confluences, etc) to execute this strategy.

Because every decision a player makes in the world will be entangled in the simulation in a multitude of ways, there will be both consequences that are known, but also those that are initially unknown, just as every leader who has ever lived became well aware.  This will dispose the player to do a broad, general analysis of how their society fits into the world and to make decisions based on “the big picture” as opposed to decisions based purely on calculations and spreadsheets.  The player will be more of a gardener tending to sometimes unruly crops, rather than a sculptor with complete control over his creation.  And this outcome could not be achieved without our multi-layered deep simulations.

Perhaps the most important but most easily overlooked advantage of SotE’s deep simulations however is its ability to generate non-scripted emergent storylines.  A random event that spontaneously generates mindlessly aggressive barbarians and dumps them into your territory is not an interesting story.  Deforesting a nearby jungle and inadvertently causing desertification in the savanna to the North--- and then having its inhabitants show up on your doorstep as a result--- IS an interesting story.  Building a “settler unit" and founding a city that gradually grows and furnishes you with X resources is not a very interesting story.  Having some of your citizens in your overpopulated society set off on their own, found a distant trading port, and eventually grow to eclipse your own society IS an interesting story.  And it is the dynamism of SotE’s simulations that will allow the second examples to exist in infinite multitudes.

In the end, the story that is told from the self-evolving world and the players actions is what all of the advantages of deep simulation are conspiring to create.  It’s one thing to act in the interest of “winning” a game.  It’s another to see the thousands of consequences--- large and small--- that result from those acts.  Consequences that will ripple through the game for eons.

If you don't mind me asking. How large is each hexagon on the globe? ib miles or kilometers or whatever.

Brilliant, looking forward to leading a nomadic tribe in excursions to hunt furs and crash the fur economy of a rival sedentary power :P