The Foundations of Life 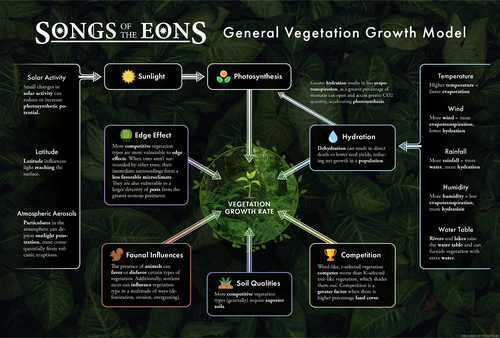 The Turks and Mongols developed a nomadic culture atop the sprawling grasslands of the Steppe, their horses nourished by the sea of grass.  The dry, cold climate of the grasslands made pre-modern agriculture impossible in most places, but the expansive open spaces were practically tailor made for pastoral life, with the steppe grasslands being a virtual highway between the settled civilizations that bordered it.

The Egyptians built a civilization that gradually adapted to the subtle nuances of the Nile River and worshipped gods that resembled the creatures of the swamp and river bank.  The rising waters of yearly floods brought fresh loam each year, which not only nourished the Egyptian people, but also the ethics and cautionary tales of their culture.  The deserts beyond the banks of the Nile would keep the population tightly hugging the river banks, making it easy for Pharaohs to exert tight, centralized control over their populations.

The Mayan civilization burst to life by mining the shallow, fragile soils and jungle biomes of Central America, only to discover within a few centuries that the land upon which they had based their advanced civilization would reward this abuse with collapse.

The exotic richness of these societies and their eventual fates did not come about by complete random chance alone.  Like a forest growing on fertile soils or lichen clinging to bare bedrock, fundamental differences in ecology influenced societal evolution just as fundamental differences in geology and climate influence ecology.  Ecology matters in Songs of the Eons because ecology is the soil upon which civilizations grow.

How we’re constructing our model:

The real world’s biomes do not come about by accident.  Where and why certain types of biomes exist is ultimately determined by a host of foundational conditions: soil quality, soil depth, light intensity, temperature, rainfall, wind, an area’s water table, humidity, and more.  While this might seem like a difficult problem to solve, version 0.1 has conveniently furnished us with these variables as a natural consequence of replicating plate tectonics and climate.  The climate model has given us temperature, rainfall, wind, humidity, and sunlight distributions.  The tectonic and geology system has given us topographic variation in the afore mentioned variables, but also soil information with orogenically active plate boundaries, volcanoes, geologic inactivity, and more, giving us essential information about the bedrock which ultimately becomes the all important soils of ecosystems and agriculture.  After studying the diverse ways in which these variables interact in the world to create different biomes, we’ve developed a working model for Songs of the Eons.

So in effect, at the foundation of SotE’s ecology system is the variables that determine ecology.  For now, we’ll take a cursory look at the core variables that influence a biome: sunlight availability, hydration, and soil.

Sunlight availability is ultimately a function of latitude, solar activity, and atmospheric aerosols (for example, in the case of large volcanic eruptions).  More light reaching the ground in an area determines maximum photosynthetic potential.  However, not all plants in all landscapes can fully utilize this potential, particularly if there is insufficient water.

Water is essential to plant growth as both a means of cooling the plant via transpiration as well as for biological processes.  The more a plant tries to utilize sunlight, the more CO2 it requires, but acquiring CO2 also means opening small pores on its leaves, known as stomata.  The more pores that are opened, the more water it loses via transpiration but the more CO2 it acquires for photosynthesis.  Thus, areas like deserts which are constrained in water get abundant sunlight, but growth rate is lower than its maximum potential because plants are unable to get sufficient CO2 to maximize utilization of sunlight.

Many variables influence water.  The two primary sources of water pertinent to plants so far in SotE are water from rainfall and water gained from the water table.  How effectively this water is used depends on other variables like temperature, wind, and humidity.  High humidity helps prevent water loss due to transpiration.  Higher wind speed does the opposite, as well as temperature.  Thus, a location which appears to have high amounts of rainfall, in fact, can have relatively parched plants favoring scrubland if wind and temperatures are high.  These subtle nuances can have very significant influences on a civilization’s viability in a given biome, as we will learn later.

The last major factor influencing biomes is soil depth and fertility.  Geologically active areas that have experienced recent uplift from the tectonic model as well as the presence of volcanoes will furnish vegetation with faster growth due to more nutrient richness of the soils (it’s no coincidence that many advanced civilizations arise near quite perilous locations, like those with frequent earthquakes or in the shadow of volcanoes).  More nutrients will also tend to favor biomes like broad leafed forests which have faster growth.  Geologically inactive areas--- like ancient, undisturbed crust in the middle of continents--- will tend to see the opposite.

Other variables influencing biome type and vegetation growth rates include competition between vegetation types, faunal influences in the form of grazing animals and intelligent beings, and edge effects and habitat fragmentation.

Different biomes will develop, evolve, and change based on the afore mentioned underlying variables, just as they do in the real world.  Tropical jungles arise in locations with high rainfall and high sunlight, needle leaf forests in places with decent rainfall but inferior soils, high grass plains in locales with decent rainfall and generally deep soils, etc.   And of course, civilizations themselves will contend with the unique differences of each of these biomes, as well as raise animals and plant crops which themselves are adapted to said biomes.

However, to achieve the goal of “dynamically evolving” biomes, we need a better understanding of what is growing in each of our tiles, and that will be the subject of our next development diary.

But i have to ask.Will this come even close to completion? Every game i've found that is this detailed usually stops before getting released.

We want to spend a lot of time on this project. The ideal is to keep developing this game for over 20 years (kinda like Dwarf Fortress and Kenshi devs did). Along the way we will release playable versions of the game that won't have all the features implemented (but will still have more depth than all the competition on the market - see our tectonics demo).

I did see it. I downloaded and started it thinking it was a completed demo XD. You should have seen my face when i realized it was only some 'simple' map things. I admire your goal of being a long term dev of a single game, a lot of games were ruined because of rushing so it's refreshing to see people like you. Hit me up when you got the next demo ready.

Good Luck with your game!